Mithali Raj’s biopic, Shabaash Mithu is one of the most awaited films. The film is based on the cricketing career of the current India Women’s ODI and Test team captain Mithali Raj. She is currently leading the Indian team in the ongoing World Cup in New Zealand. The trailer of the movie was launched today as shared by Taapsee Pannu, who is portraying Mithali on screen.

Pannu took to Twitter and posted the 56 second-video which started with a full capacity stadium. It is presumed that the stadium might be the Lord’s Cricket Ground, where India played the final of the 50-over World Cup in 2017.

“In this Gentlemen’s sport, she did not bother to rewrite history, instead she created HER STORY!,” Pannu captioned the video.

The upcoming film is produced by Viacom 18 and is directed by renowned Bengali director Srijit Mukherjee. As of now, the release date of the film is not known yet. Talking about Raj’s career, she recently became the first women player to play six ODI World Cups. She also led the team to two finals in 2005 and 2017, where they lost to Australia and England respectively. Apart from that she has numerous other feats to boast about. She is the only Women’s cricketer to score 7,000 runs in the ODI format and the first batter hit seven straight ODI half-centuries. She is the first India player to score 2,000 T20I runs, first women cricketer to score 2,000 runs in T20I career and youngest player to score a Test double hundred.  Meanwhile, the Twitterati were in awe of Taapsee’s performance in the movie and started trending #Shaabaash Taapse.

Wow, what a trailer #ShabaashTaapsee 🏏

Waiting for this one badly as Mithali Raj is a living legend in women's cricket. I know taapsee mam will rock it big time. Movie will be full on emotions, thrill, goosebumps. Can't wait for the Indian legend❤️

Peace mercy and blessings of almighty GOD on you taapsee mam

What a day to unveil it! It definitely made my Monday morning..i am still waiting for the release date ..thank you thank you for the teaser of #ShabaashMithu 🙏 that revelation of your face as #MithaliRaj in the end has my heart ❤️ you will give full justice to the character 👍🧿 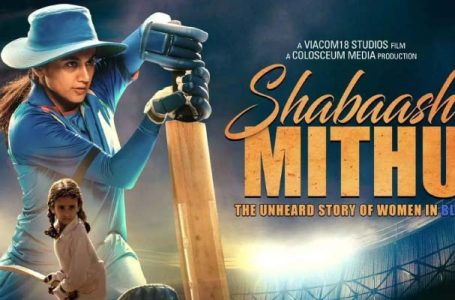 “The Trailer is heartwarming” – Twitteratis showed... ‘A girl who chased her dream with... How can India qualify for semifinals of...