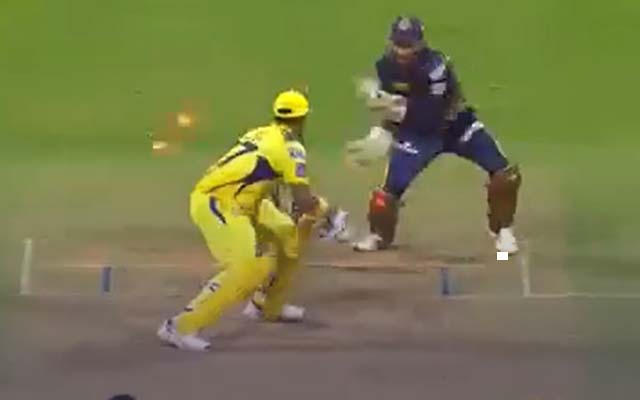 Chennai and Kolkata are facing off each other at the Wankhede stadium in the first match of the Indian T20 League. Kolkata won the toss and invited Chennai to bat first.

Kolkata got a great start to the match as Umesh Yadav dismissed Ruturaj Gaikwad in the first over of the match. After this Conway soon followed Gaikwad. Rayudu joined Uthappa at the crease and it was looking like the duo is stabilizing the Chennai ship.

Uthappa was looking in good touch as he slammed two sixes and two fours during his 28 runs innings. It was the final ball of the 8th over from Varun Chakravarthy, when overbalanced trying to flick the ball. Chakravarthy fired the ball down the leg and the Kolkata wicket-keeper Sheldon Jackson took off the bails in a flash. The stumping was so quick that Uthappa was left with no time to react. Chennai was left struggling at 49 runs for 3 wickets as Uthappa walked back.

The Indian cricketing legend Sachin Tendulkar soon took to Twitter after the dismissal and expressed his joy at seeing such a class act behind the stumps from Sheldon. He also stated that the lightning-fast reaction from the keeper reminded him of MS Dhoni. Dhoni has been famous for his quick reactions behind the stumps, it was a reference to that.

The post from Lightning-fast read – “That was an outstanding stumping. @ShelJackson27’s speed reminded me of @msdhoni. Lightning-fast!!”

That was an outstanding stumping. @ShelJackson27’s speed reminded me of @msdhoni.