Australia pacer Mitchell Starc is one of the most dangerous pacers, especially with the new ball. Over the years, he likes aiming at the stumps of the batters. Most of his victims are either bowled or lbw. The left-arm pacer brings the ball into the right-hander that leaves the left-handers. Meanwhile, in the ongoing ODI against England, the New South Welshman produced a ‘Jaffa’.

In the first over of the Three Lions, Starc cleaned up in-form Dawid Malan with an outswinger. Apparently, the former bowled aiming at the middle stump, and the ball shaped away after pitching. Malan, in reply, couldn’t do much and lost his wicket in the process. The left-hander had scored a hundred in the last game. The video of the dismissal was uploaded by cricket.com.au and it is going viral.

Talking about the game, the Aussies won the toss and decided to bat first at the Sydney Cricket Ground. After being reduced to 43/2, the team managed to amass 280/8 at the end of the innings. Former skipper Steve Smith scored 94 and missed out on his fifth ODI hundred at his home ground. On the other hand, players such as Marnus Labuschagne and Mitchell Marsh scored the fifties as well.

For the recently-crowned T20 World Champions, Adil Rashid carried his form with the ball and picked three wickets. On the other hand, Chris Woakes and David Willey took two each while Moeen Ali took one. In reply, the Jos Buttler-led side had lost two wickets in the first over. Phil Salt (23) was looking before he lost his wicket while exposing his leg stump. At the time of writing, the visitors scored 104/3.

The pair of James Vince and Sam Billings have put together 70 runs and counting. The team would want them to add at least 50-60 runs more. They need 177 runs in 30 overs and they have managed to keep the required run rate in check up until now. 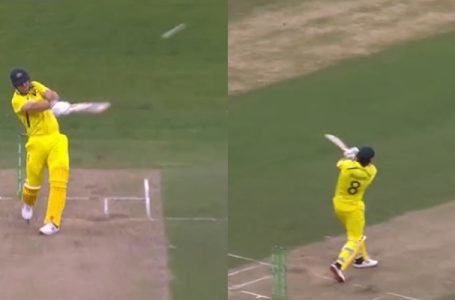