Bollywood actor Vicky Kaushal reacted to memes made on him by his fans. On January 30, he woke up to a lot of memes involving his name. Kaushal might not be aware of what was happening but when he realized the situation, he let the fans get along with it.

It all started On January 30 night, when India U19 were playing their quarterfinal clash against the defending champions Bangladesh. There was a point when the broadcasters put up Bangladesh’s batting card. At this moment, Vicky Kaushal’s name popped up but in splits. The India players- Vicky Ostwal and Kaushal Tambe were written on the scorebook with Vicky’s name on top and Kaushal’s name under the former’s name forming Vicky Kaushal.

Fans then circled out the names and started spamming the ‘URI’ actor. The actor sarcastically thanked his fans for spamming him with the memes.

“Thank you internet for spamming me with this today. Best wishes Team India U19,” Kaushal wrote on his Instagram story alongside a picture of India vs Bangladesh Under-19 World Cup 2022 scoreboard. 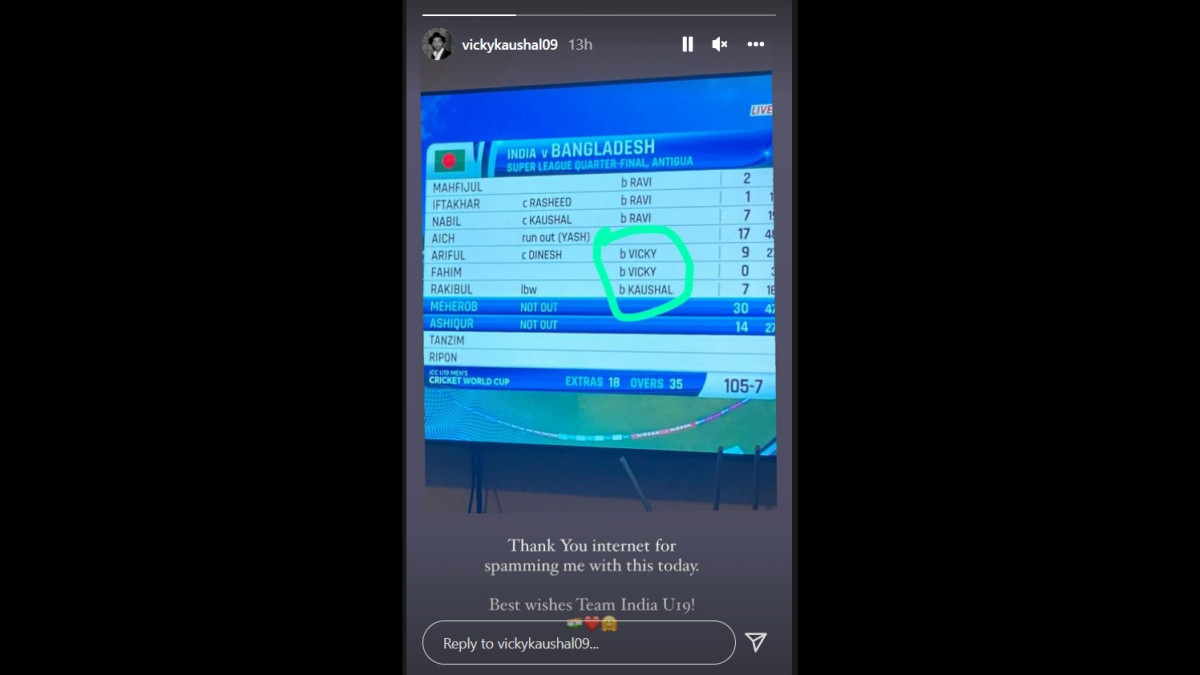 The Yash Dhull-led side beat the Rakibul Hasan-led side by five wickets to enter the semifinal, where they will lock horns with Australia. Being asked to bat first, Bangladesh were bowled out for a paltry total of 111 runs. Eight batters could not even cross the double-digit mark. Pacer Ravi Kumar took three wickets while Vicky Ostwal took two and Kaushal Tambe, Angkrish Raghuvanshi, and Rajvardhan Hangarekar took on each.

In reply, the four-time winners reached the target with ease, thanks to Raghvanshi (44), Shaik Rasheed (26), and Yash Dhull (20*). Pacer Ravi Kumar was adjudged Player of the Match. 5 Indian Cricketers Who Make It Big...